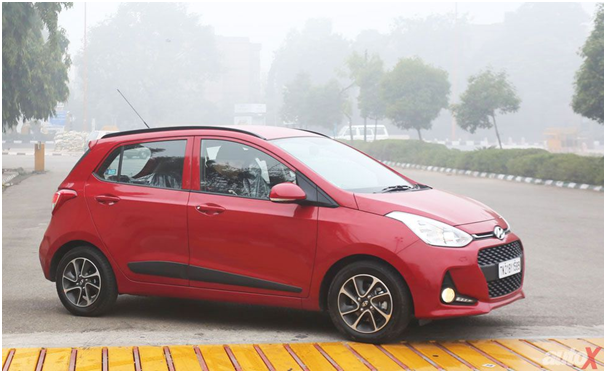 Before I begin, here’s a disclaimer. This is not a full-blown comparison of the Grand i10 with the Nios. Without trailing off from the subject, let me introduce you to the Nios first. The Nios – or the Grand i10 Nios, in its entirety – is the third-generation of the i10. The Grand i10 – the one you see above and the one we’ll be talking about vividly in this blog – is the second-generation of the i10. And as some Hyundai officials decided one day, both sell alongside each other.

However, there’s a catch. While the Nios is technologically advanced, better-equipped, and a size bigger than the Grand i10, it is priced on the higher side too. So, this means, Hyundai is keen on selling both of its i10(s), so as to capture the market share.

Therefore, the car you see above sells alongside its newer generation model. And Hyundai has intelligently placed some discounts and discontinued some variants of the Grand i10, so that it does not overlap with the Nios.

While the Nios is, hands down, a better car in comparison to the Grand i10 in almost every aspect, the Grand i10 trumps its successor in terms of price. And deservedly so. So, here’s why the Grand i10 can be still considered if a small hatchback is on your bucket list.

Put their specifications side by side, and the Hyundai Grand i10 appears to be smaller only by a few numbers. While the Nios matches the Swift in terms of its dimensions – or tries to do so – the Grand i10 is more like an Ignis competitor. It measures 3,765mm in length, 1,660mm in width, and 1,520mm in height. It has a wheelbase of 2,425mm and a ground clearance of 165mm. The fuel tank can hold 43-litres of fuel and the boot space can hold 256-litres of luggage.

Under the hood, the Grand i10 now only comes with a single engine. Earlier, the Grand i10 was available with a petrol and a diesel engine. The petrol engine is carried over, and it was recently upgraded to meet the BS-VI emission standards. It’s the same 1.2-litre Kappa series engine, which produces 81bhp and 114Nm of torque. It only comes mated to a 5-speed manual gearbox. There used to be a petrol-AT combination too, which was also discontinued as the Nios came over.

So, if you seem to be interested in the second-generation of the i10, the petrol-manual powertrain seems to be the only option. Interestingly, this powertrain is in the same state of tune here as the bigger Nios.

While it may be a size smaller than the Grand i10 Nios, it is less fuel efficient than its sibling. Well, we have explained the same in our full review. As of now, the petrol-manual derivative of the Grand i10 delivers 19.77km/l, as per ARAI. For the mileage hungry consumers, however, the Grand i10 CNG is also available as an option.

Even though it’s not as well-equipped as the Nios, it’s well-equipped considering its price. While the top-spec Asta model – now discontinued – was well-loaded, the mid-spec trims are decently-kitted, considering there’s lots of equipment for an average buyer. The Grand i10, as of early-2020, comes in four shades, namely, Polar White, Fiery Red, Titan Grey, and Typhoon Silver. Earlier, it was available in two dual-tone shades as well, namely, White/Black, and Fiery Red/Black.

All the details regarding the Hyundai Grand i10, namely, the engine, specifications, variant wise equipment, colours, dimensions, interiors, and exterior details are extensively covered in the brochure.

As of early-2020, the Hyundai Grand i10 is available in three variants, withtwo variants for the petrol-manual and one variant for the petrol-manual-CNG. The prices start at Rs. 6.01 lakhs for the Magna variant going all the way up to Rs. 6.53 lakhs for the Magna CNG variant (both prices ex-showroom, Delhi). As said earlier, you can grab huge discounts on the Grand i10. The prices above, however, are exclusive of the said discounts. For the variant-wise on-road prices, visit us at autoX.

For more on the Hyundai Grand i10, be sure to tune in to autoX.